Sam has been a member of the RUAS Council since 1999, however, he initially joined the RUAS in 1987 as a member following his appointment as Senior Agricultural Editor of the Department’s monthly publication – ‘Agriculture in Northern Ireland’.

While working as editor, Sam was influential in the Society and helped to prepare a booklet about agriculture for the ‘Children’s Trail’, a feature that is still prominent in the Show today. This involvement soon led to him being co-opted onto the Horticulture Committee in 1997 where he since then served 23 years including three years as Chairman of the Committee.

During his time on Council, Sam presented two important historical volumes written by Samuel B. Morrow to the RUAS, both of which he helped edit. During the 2010 Council Christmas lunch, Sam presented ‘Farming in County Fermanagh’ – Development in the Twentieth Century and in November 2014 he presented ‘A Landlord’s Legacy’ – The Farming Societies’ contribution to the development in County Fermanagh in the nineteenth and twentieth centuries.

Furthermore, in December 2012, Sam also presented a large abstract landscape painting created by his son, Jonny, a contemporary artist. This painting remains on display in the Office of the Chief Executive.

Speaking about his retirement Sam commented, “I feel it is time to move on and allow the next generation ‘to come on board’ to the Council and the Horticulture Committee, bringing with them new ideas and fresh enthusiasm.

He added, “I will continue to be a member of the RUAS and I will remain supportive of all the objectives of the Society.” 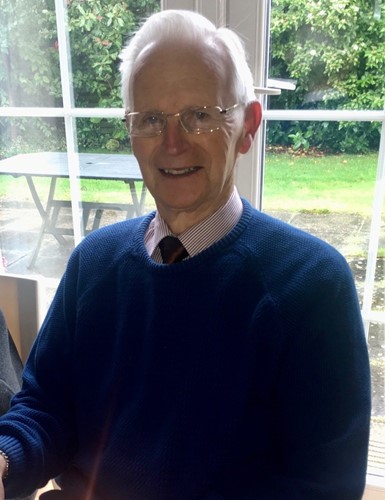