Billy Martin has been elected as the new President of the Royal Ulster Agricultural Society.

Billy lives in Greyabbey, Newtownards and is a partner in the family farm, which comprises primarily of sheep and willow production.

He has been a member of the RUAS Council since 1973 and has served on the Sheep, Sheep Shearing and Works Committees.  Billy’s dedication to the agricultural industry extends beyond his involvement with the Society.  He held the position of President of the Young Farmers Clubs of Ulster from 1975-1977 and was President of Ulster Farmers Union from 1985-1986.

Billy commented on his new position saying, ‘‘It has been an honour and a privilege to have been elected President, as we look forward to the 151st Balmoral Show.  Our Agri Food industry is the backbone of the Northern Ireland economy and the Royal Ulster Agricultural Society will endeavour to promote it in the challenges ahead.’’ 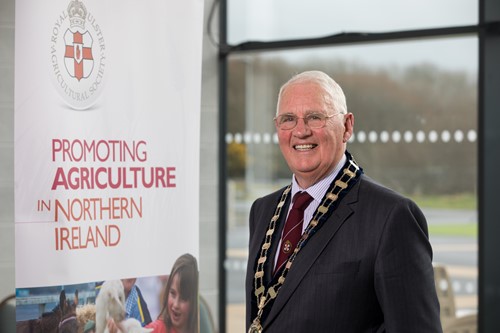