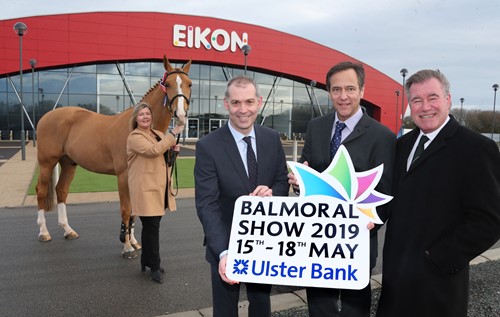 The Royal Ulster Agricultural Society (RUAS) and Ulster Bank have officially kickstarted the countdown to this year’s Balmoral Show which will officially get underway in just three months’ time.

Taking place at Balmoral Park, Lisburn from May 15-18, the 2019 Show promises to build on the success of last year’s historic 150th Show. The four-day event will feature more than 650 trade stands, the NI Food Pavilion featuring the best of local food and drink producers, hundreds of competitions and classes, and a wide range of family entertainment and attractions.

Alan Crowe, RUAS Chief Executive, said: “It’s a great honour to officially kick-start the countdown to our doors opening again in 2019 and indeed to a new era for the Balmoral Show. Last year was all about celebrating our landmark anniversary but now we are looking towards the future and excited to see how the Show continues to grow and evolve.

“We are pleased to have Ulster Bank on board again as our principal sponsor as their support has played an integral role in enabling us to bring the Show to the fantastic spectacle it is today. Whether you’re looking for a family day out, great food or the chance to see some exceptional livestock displays, it’s all in the Show.”

2019 will be Ulster Banks’ 10th year as principal sponsor of the Balmoral Show, a legacy Commercial Director Nigel Walsh says he is extremely proud of. “For ten years we have been at the helm of Northern Ireland’s largest agricultural event and are proud to have worked closely with RUAS to further the Show’s appeal to a much wider audience.

“Gone are the days when the Balmoral Show was a strictly agri event and it’s a huge testament to the work of RUAS to see this vibrant event attract an increasingly metropolitan, urban audience. For us at Ulster Bank, the Show is all about reinforcing our commitment to the agri-food industry and we look forward to showcasing the many ways we can provide help and support to this crucial sector across the four days of the Show.”

New attractions for 2019 include Jason Smyth Adrenalin Tour along with Clive Shaw Trucks and the return of the hotly-contested best-dressed competition. Those wishing to take part in livestock competitions during the Balmoral Show are reminded that entries open on Wednesday 20th February and close on Wednesday 20th March.

The 2019 Balmoral Show runs from Wednesday, May 15 – Saturday, May 18. Discounted pre-show tickets are available to purchase online now HERE.